Fathom > February 2021 > Opinion | Will the Israeli electorate like Cakeism? 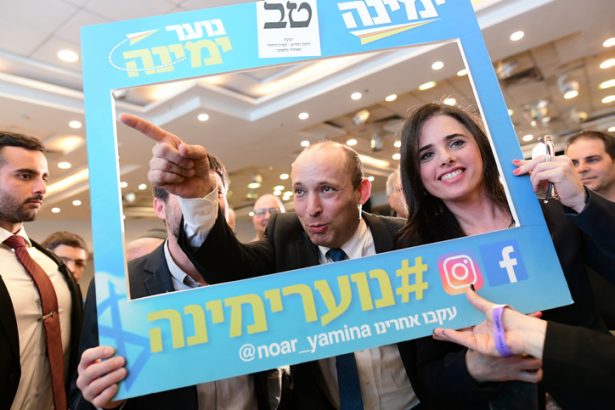 On the one hand, Yamina are increasingly described as Kingmakers. On the other hand, the party’s ambiguity could end up hurting it amongst an Israeli public which increasingly sees these elections as boiling down to one thing – do they want Netanyahu to stay as Prime Minister? Fathom Deputy Editor Calev Ben-Dor discusses whether Naftali Bennett’s electoral strategy will work?

Shortlisted by the Oxford English Dictionary in its 2018 ‘word of the year’, cakeism first shot to fame in 2016 when then Foreign Secretary Boris Johnson explained that his policy on cake was ‘pro having it and pro eating it’. The idea that – contrary to the famous saying – one can have one’s cake and eat it, subsequently became a critique of Britain’s negotiating position on Brexit. One senior EU official described Prime Minister Theresa May’s 2018 speech on the country’s future economic partnership with the EU as ‘still in the world of Cakeism’. Months later, an MP’s aide was photographed in Downing Street with a handwritten note about Brexit which read ‘What’s the model? Have cake and eat it.’ In December 2020, following a last-minute post Brexit trade deal with the EU, Johnson – who in the meantime had become Prime Minister – described the treaty as ‘cakeist’.

While the British are known to like their cake, cakeism isn’t limited to its shores. After Israel signed a normalisation deal with the UAE, Prime Minister Benjamin Netanyahu did his best to convince the public it came with no cost (despite reports that it involved suspended his annexation policy and giving a green light to the US to sell F-35’s to the Emiratis). Israelis could apparently have it all – good relations with Arab neighbours and the status quo in the West Bank; a new and better deal with Iran without any significant concessions; free handouts for each family without any long-term damage to the economy or national budget.

But does Cakeism work? Flush from his Brexit promises, Johnson won a landslide in the 2019 election. Yet there’s always a danger of ultimately falling between two stools. Senate Majority Leader Mitch McConnell likely failed in his cakeist attempt to acquit former President Donald Trump on charges of impeachment while simultaneously accusing him of practical and moral responsibility for the storming of the Capitol.

For Trumpists, McConnel’s comments were treacherous. For traditional Republicans shocked by the Capitol scenes, they didn’t go far enough.

Which brings us to Israel’s elections. Most campaigns are focused on a stark ‘either/or’ conundrum. For Likud, its Bibi or Tibi (of the Arab Joint List) or ‘Netanyahu the statesman’ versus a slew of ‘small time politicians.’ For staunchly secular Yisrael Beitenu, its Lieberman or the ultra-Orthodox. For Yair Lapid’s Yesh Atid and Gideon Saar’s New Hope it’s a stately or sane government on the one hand versus one dominated by fundamentalists and fanatics on the other. All more akin to Eddie Izzard’s ‘cake or death’ skit than ‘have it all cakeism’.

The right wing Yamina party and its leader Naftali Bennett have taken a different tack. They have called for Netanyahu to be replaced and posited Bennett as a Prime Ministerial candidate; In a Times of Israel interview, Bennett castigated Netanyahu’s decision making, describing the past year as “an unmitigated disaster in terms of incompetence and mismanagement.” Yet Unlike the other major parties, Yamina have refused to rule out joining a Netanyahu-led coalition.

Behind this strategy is Bennett’s target of inheriting the mantle of ‘leader of the right-wing’ in a post-Netanyahu era. Yet while he wants Caesar’s crown, he doesn’t want the role of Brutus. Guided by Michael Heseltine’s prediction that “he who wields the knife never wears the crown”, Bennett would rather someone else ends Netanyahu’s political career. Ultimately, he wants to have his cake and eat it, to promote anti-Netanyahu credentials while keeping the door open to joining his coalition.

But will the strategy work? On the one hand, Yamina are increasingly described as Kingmakers. While polling shows Likud in the high twenties – far clear of Yesh Atid in the high teens and New Hope and Yamina further back – Netanyahu has no path to retaining the premiership without Bennett. If Likud’s rule hinges on bringing Yamina into government, the latter could name its price. From Netanyahu’s perspective, even giving up half the kingdom would be worth it.

On the other hand, Yamina’s ambiguity could end up hurting it amongst an Israeli public which increasingly sees these elections as boiling down to one thing – do they want Netanyahu to stay as Prime Minister? Right wingers who admire Bibi will vote Likud. Right wingers who despise him will cast a ballot for Saar. Centrists and those to the left can choose Lapid or other options.

Bennett may dream of echoing Boris Johnson’s electoral success. Yet faced with a binary choice, and sick of its fourth election in two years, Israelis may feel they have neither the luxury nor the appetite for cake and its proponents.

This piece was originally published in Jewish News