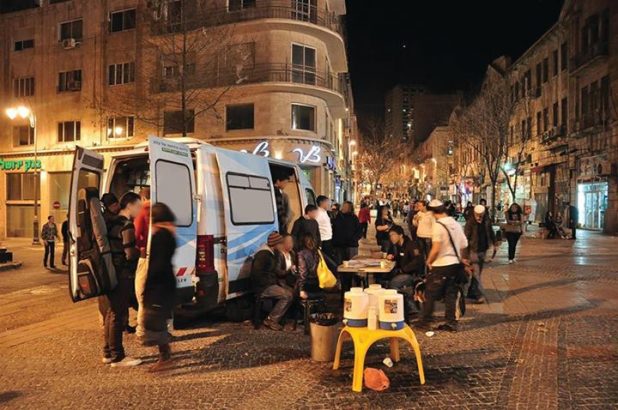 Dr Simcha Getahune, Director of ELEM – Youth in Distress spoke to Fathom’s Bethany Coates about troubled youth in Israel, the Ethiopian Israeli community, and her personal experience of making Aliyah to Israel from Ethiopia in 1984. Simcha explained how ELEM tackles problems such as child prostitution, violence and crises of identity, by reconnecting young people with their families and empowering them.

Bethany Coates:   Could you tell me about your experience of immigrating to Israel?

Simcha Getahune: I made Aliyah from Ethiopia in 1984 when I was almost 17 years old, I was without my parents and alone. I studied a preparatory programme in Hebrew, and then studied sociology at Bar Ilan University. I finished my BA and continued to study for my MA and PhD, in the same subject. I am married, and a mother with two young adult girls at home.

I develop projects concerning multi-cultural sensitivity – how to work with people who come from different origins, and how to treat them. In ELEM we have more than 80 programmes all over Israel – we meet about 12,000 youth in distress (a lot!). 45 per cent of them come from diverse cultural backgrounds and 55 per cent are [Jewish] Israelis. We have a project in every city from Eilat up to Kiryat Shmona. That’s more than 30 youth centres and a van which works throughout the night. We also have a programme for the youths who work in prostitution.

We believe that if we want to be effective we must work with the community. I work with the family of each youth. Sometimes the youth has run away from their family, dropped out of school and is a vagrant, on the street, involved with drugs and alcohol. We try to reach out to them and convince them to get treatment. A lot of the time we try to empower them to be human beings – they are very nice children but they have big problems.

One of their big problems is identity. Every adolescent has a big problem with their identity, asking ‘Who am I?’ If you are speaking about Ethiopians, Arabs and other diversities they have more problems. The Ethiopian youth ask: ‘Am I Israeli? Am I Ethiopian? Who am I?’; The Arab youth say: ‘Am I Israeli Arab? Am I Palestinian Arab? Am I a Muslim?’; ultra-Orthodox youth say: ‘I am Haredi, but am I part of the Israeli people?’ They must cope with many problems. We try to help them be proud of their culture, to give them a chance, and give them hope.

One of the very important principles in ELEM is diversity. We have 270 workers in ELEM, we have more than 2,000 volunteers and they come from every background: doctors, psychologists, police, students – everyone. They come and are involved because they want to take part in the youth work. Most of the workers are social workers, criminologists, psychologists, and they bring a lot of professional experience and a varied cultural background. We give them a course on how to work with all the different people. Of the 270 workers, 35 per cent come from Arab, Ethiopian, Russian and ultra-Orthodox backgrounds. That means that the youths who come to our programmes can speak in every language; they can meet everyone, of all cultures, to give them an opportunity and to choose a good and right way to live. 45 per cent of the 12,000 youths in distress that we meet come from minority cultures; if they see that the [ELEM] workers also come from various cultures and they work together, they can mirror these actions and live the right way.

SG: No. For the youth, yes, but for the rest of the Ethiopian community there is an absorption problem. They are new. They have come to a new country – a Jewish country – but a new culture, a new language. Everything is new. It is very hard to cope with all these changes at the same time. The young people just want to be part of Israeli society. We are Jewish, we have come and worked very hard to be in Israel, but we don’t get enough opportunity.

Nevertheless, the Ethiopian community is a proud community, they are proud of their culture and they learn to be black ‘others’ – which is not easy. When the young Ethiopians finish high school they want to be in the army. They are eager soldiers and they have a vision for the army – they like to be there. The Ethiopian people see that one of the things we have contributed to in Israeli society is the army. Also, the girls are in the army, not just the boys, which is very good. I think that the army is a really good place for integration. Everyone in the army is equal at the same rank.

BC: Did you serve in the army?

SG: No. When I arrived in Israel Ethiopian girls were not under any obligation to join, but today I want to go so badly! My brothers, my sisters, everyone has been in the army and they are so happy. They have many professional qualifications and they are so proud. They also feel that they are actively taking part in this great country, the Jewish country. This was my dream, to come and to be part of the Jewish people.

SG: In this prostitution programme ELEM work with everyone. I speak of all the youth, not just Ethiopians. We have a special department in ELEM to deal with the problem of prostitution. This problem is found all over Israel, but particularly in Tel Aviv: we have a wonderful programme there, open 24 hours every day. We try to help by showing them there is another way, and that the way of prostitution is not good – it is dangerous. Most of the youth go into prostitution because they have problems. They do not wake up one day and decide they want to live like that; it is because of their problems, such as a lack of money, lack of love, lack of everything. ELEM tries to help them get through these problems. We provide a health program, give psychological treatment and offer the chance to go to our centres to simply rest, eat or change their clothes.

We are seeing a little progress now. This year the Israeli government is creating a large programme, similar to ELEM’s project in Tel Aviv. They have spent a lot of money on the project. They have seen that ELEM’s small project is producing good results so, along with Tel Aviv municipality, they have put forward money which will go towards working on a big national project for the youth involved in prostitution.

SG: We have three. First, a focus on Ethiopian youth because there are a lot of problems there, including violence. We are trying to develop a holistic project for Ethiopians which includes the family, the community, their education – everything. Second, the prostitute programme, working with the government – not easy! A third target is to develop the project for the ultra-Orthodox population. We have already started to work in this area by opening projects in Modiin and Zfat. We have in our staff Haredi workers, which is unique and so exciting. The Haredim come and work with ELEM and other Haredim. So we have these three targets to work towards, alongside the programs that we always do.