Fathom at 10: Celebrating our first decade 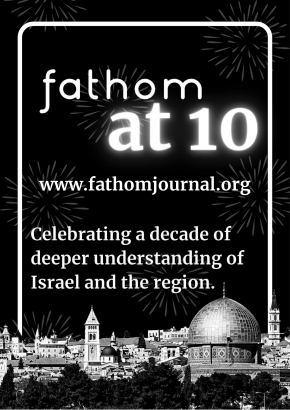 Fathom was created by BICOM in 2012 for the long haul. We were created not to chase the news but, over time, to help realign opinion about Israel, particularly among the mostly skeptical, mostly liberal opinion formers and decision makers found in western universities, think tanks, politics, journalism and civil society.

Fathom was to make a balanced and expert case for rejecting the demonising conceptual frameworks, false historical narratives and hate-filled sensibilities about Israel that were becoming increasingly prevalent in parts of Western intellectual culture, especially in civil society and on the left. These frameworks, narratives and sensibilities, we believed, were becoming a wall separating people in the West from having a more balanced view of Israel and the conflict. We were created to knock that wall down, not to be cheer leaders for any particular party in Israel.

As we reach our 10th birthday, we have published around 1000 articles, interviews, book reviews, film reviews, ops, diaries, as well as our series ‘My Israeli Music’, ‘Three Best Books’, ‘Rereadings’ and more – has been read two million times by over half a million unique users from well over 150 nations. Fathom has published the best writers and they have been read in foreign ministries, editorial offices, party headquarters, think tanks, and universities all over the world.

Our celebration booklet includes Fathom editor Alan Johnson’s “Editor’s Reflections at 10”, along with over thirty messages of congratulation and appreciation from our contributors and readers.