Fathom > Autumn 2017 > Book Review | The Endless Quest for Israeli-Palestinian Peace: A Reflection from No Man’s Land

Book Review | The Endless Quest for Israeli-Palestinian Peace: A Reflection from No Man’s Land

by Lauren Mellinger
BACK 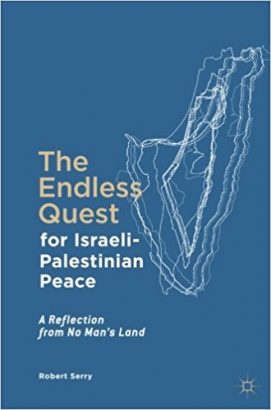 In his new memoir The Endless Quest for Israeli-Palestinian Peace: A Reflection from No Man’s Land former UN Special Coordinator for the Middle East Peace Process Robert Serry provides an in-depth, insiders account of both conflict management and efforts to broker peace between Israelis and Palestinians between 2007 and 2014.

During his tenure, Serry was engaged in three peace initiatives, three wars in the Gaza Strip, and a series of cease-fire negotiations, all while working to alleviate the deteriorating humanitarian situation in Gaza. These events, in addition to ongoing Israeli settlement construction, the problem of divided government among the Palestinians, and a growing trust deficit on both sides, have led to what Serry describes as ‘the deepest crisis ever in the efforts to arrive at a negotiated two-state solution’. (195)

The first part of the book offers an account of Serry’s day-to-day experiences as a UN envoy. Beginning with an assessment of what he considers to be the UN’s credibility gap, Serry is incredibly attentive to detail in his account of his tenure as UN Special Coordinator (even providing a description of what former US Secretary of State James Baker termed ‘bladder diplomacy’ after — in keeping with local custom — drinking too many cups of tea during a meeting with a Hamas official). (66-68) In the latter sections of the book, Serry describes the lessons he believes the international community should derive from more than two decades of failed peace initiatives. An advocate of supporting the parties in negotiating a final-status resolution that results in two-states, Serry concludes his memoir by proposing a new paradigm for reaching a two-state solution, while also suggesting a set of ‘end-game parameters’ designed to break the cycle of failed peace talks.

In one particular anecdote, Serry recounts an experience for the reader so bizarre it could only happen in the context of the Israeli-Palestinian conflict. In May 2011, the office of the UN envoy was forced to scramble at the eleventh hour to help organise a peace concert in Gaza. The local Hamas leadership had withdrawn permission for the concert to be held, following the announcement that the US government had killed Osama Bin Laden, who Hamas leader Ismail Haniyeh praised in a statement as a ‘warrior’ and ‘martyr’.

Further complicating matters, against the backdrop of the concert there had been a last minute breakthrough in Palestinian reconciliation talk and a pending signing ceremony had been scheduled in Cairo where the presence of the UN envoy was requested. At the same time Serry was working to assuage the concerns of the Israeli government, where news of the pending Palestinian unity government was not welcomed, nor was the news that Serry’s presence was expected at the signing ceremony. Forced to resort to what Serry describes as ‘quiet armed twisting efforts’ and serious last minute diplomatic haranguing, the UN envoy ultimately achieved a breakthrough: in what Serry notes was a significant move, Hamas’s external leadership overruled Haniyeh and ensured the concert could take place in Gaza as originally planned; the Israeli-born conductor Daniel Barenboim was also ensured safe passage to Gaza. (87)

Arguably, one of the most compelling parts of the book is Serry’s discussion of the difficulties he encountered in the interaction – or lack thereof – between the office of the UN envoy and Hamas leaders. In a chapter titled ‘Hamas: The Elephant in the Room’ Serry tackles the issue of whether a UN envoy, as a matter of principle, should be able to conduct a dialogue with all parties in a conflict, even when that would entail interactions with non-state actors ‘and even terrorists’. Though forced to walk ‘the tightrope of diplomacy’ and manage the sensitivities of both the Israeli government and of Palestinian leaders in the West Bank, Serry ultimately did engage with Hamas leaders, believing that ‘[a]s a UN envoy, I felt it was my duty to probe any prospect for positive change in Gaza, despite the odds against it’.  (73)

Believing that there is not a ‘one size fits all’ approach to engaging with non-state actors, Serry devised a test based on a series of both positive and negative indicators, that can be utilised by diplomats when determining whether to engage with a so-called proscribed armed group (PAG) — UN terminology for violent non-state actors that have not been universally designated as terrorist organisations. After considering the standing of a non-state actor against these indicators, Serry offers suggestions for how to establish criteria for UN engagement with PAGs, using his interactions over the years with Hamas as an example. The test proposed by Serry allows for diplomats to weigh several considerations: the character of the group, diplomatic sensitivities, and the need for the international community to coordinate contacts with all parties in a conflict, even if one or more of those parties are violent non-state actors.

Despite maintaining a dialogue between his office and all of the parties to the conflict, including Hamas, Serry notes that even after the third war in Gaza during his tenure – 2014’s Operation Protective Edge – ‘[m]ost of the Strip’s underlying issues were left unresolved’. (154) Nearly three years after leaving his diplomatic post Serry remains convinced of the need for all stakeholders to adopt a ‘Gaza first’ strategy, arguing that the international community ‘cannot hope to again board the peace train in the West Bank and arrive in Gaza as a last stop. We must fix Gaza – or at least stabilise it – so that we don’t see it destroyed and halting yet again any renewed peace effort’. (172)

As the title of Serry’s memoir indicates, the former UN envoy is keenly aware of what decades of failed peace initiatives have wrought on the parties, and of the perils of simply holding yet another round of talks without learning the lessons of the past two decades of negotiations. He remains concerned that as the two-state solution appears increasingly elusive, the parties are turning to a ‘one-state reality’ as the default solution.

Though Serry fears that a one-state solution is around the corner, he continues to advocate for a negotiated two-state solution, and concludes his memoir by providing a detailed set of parameters — which he deems ‘end-game parameters — for the parties, allowing for more effective future negotiations between Israelis and Palestinians, predicated on lessons he learned during his tenure.

Serry argues that while there is a clear international consensus on the issue of Israeli settlement construction in the West Bank, a similar consensus remains lacking on a host of other final-status issues, including contentious issues such as land swaps, the matter of refugees, and whether Jerusalem will ultimately serve as a capital for two states. Serry attributes the absence of an internationally endorsed substantive framework for peace negotiations as a key reason for the successive rounds of failed peace talks and argues that when, at some future date, another peace initiative is launched, a prior understanding on these issues must be reached or the new initiative will meet the same fate as its predecessors. (140-2)

While Serry continues to advocate for a two-state solution – noting the absence of any credible alternative paradigm – he provides a nuanced suggestion of what that might look like. Serry developed his model by taking into account years of failed negotiation attempts that have fostered a lack of trust in ‘the other’ as well as in the peace process itself, and the changing demographic realities on the ground. Indeed, Serry describes Israelis and Palestinians as resembling ‘unhappy Siamese twins desperately wanting to get rid of each other, but perhaps fatally entwined in one body’. (141)

Believing that the paradigm of a two-state solution based on maximum separation between Israelis and Palestinians appears broken – he proposes a two-state solution based on a Compromise on Residency Exchange (CoRE). (189-92, 199) Serry’s plan would allow for the parties to reach a compromise by granting residency status on the basis of reciprocity to a comparable, limited, and final number of Palestinian citizens and refugees becoming residents in Israel, and similarly, a reciprocal number of Israeli citizens (mainly current settlers in the West Bank) become residents in a sovereign, Palestinian state. Though Serry notes that securing agreement for such an approach would prove to be an uphill battle, he maintains that his intent is to drive the debate towards concrete steps that can be implemented in order to preserve the two-state paradigm, by allowing the parties to settle disagreements on the contentious issues of settlements and refugees, and proceed with the negotiations on other final-status issues, based on the existence of two recognised and protected minorities, residing in each state. (189-92, 199)

The state of the Israeli-Palestinian conflict in 2017 is not dramatically different from the conditions in 2007 when Serry assumed the role of UN Special Coordinator. Israeli settlement construction remains ongoing, the Palestinians continue to suffer from divided government, and both Israel and Hamas are preparing for the next war. Yet the lack of any progress in achieving a lasting peace agreement has arguably made the situation more dire still: decades of failed initiatives have resulted in a trust deficit between the parties, while the Gaza Strip is on the verge of being uninhabitable. Questions remain as to what entity an effectively serve as an honest broker in future negotiations: while the UN lacks the credibility of serving in this capacity, the intentions of the US government under the Trump administration, with respect to working towards a two-state solution, remain a mystery to even veteran foreign policy observers.

Admitting at points throughout the book that some of his thinking is outside-the-box and intended to stir debate, Serry’s account of his experiences offers much needed fresh thinking intended to foster a dialogue that will ultimately lead Israelis and Palestinians out of the destructive cycle of endless wars followed by failed peace talks, and ensure that a viable two-state paradigm exists when they are ready to negotiate. 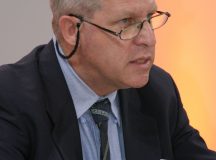 By Giora Eiland
Giora Eiland served in the IDF for 33 years, rising to Major General. He left... Read more > Autumn 2017 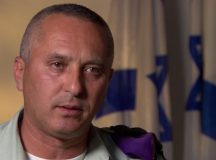 How to change reality in Gaza and shape... 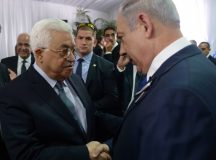 By Doron Matza
Doron Matza proposes a new critical paradigm to understand the relationship between the Israeli and... Read more > Autumn 2017