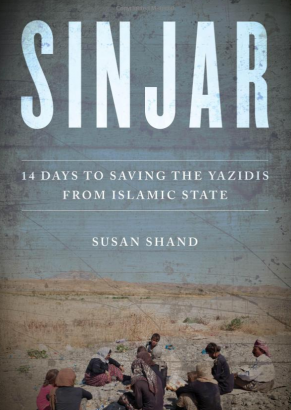 Susan Shand’s book is a moving account of the Islamic State’s (ISIS) genocide against the Yazidi community in the Sinjar region of northern Iraq in August 2014, which claimed the lives of over 2,000 Yazidis, saw over 10,000 more abducted and tens-of-thousands more displaced — arguably constituting ISIS’s single most heinous crime against humanity. It is Shand’s first book and the only comprehensive examination we have of ‘the first genocide of the twenty-first century’.

Shand asks how it was possible that ‘the greatest military might in the world could rally so quickly on behalf of an obscure people without influence or power?’ In the very first chapter, by describing how one threatened Yazidi family called relatives in the US to tell them what was happening and how those relatives feared ‘they were about to hear from thousands of miles away, the murder of their family,’ she sets the tone for the rest of the book. The narrative moves the reader between the experiences of the victims in northern Iraq as they try to flee ISIS’s massacres and the political developments in Washington that eventually led to the US military intervention, lending the book a cinematic quality.

We hear from several key individuals interviewed by Shand about that fateful fortnight, who each helped to raise awareness. Iraq’s only Yazidi MP Vian Dakhil ensured unprecedented unity in the parliament. Yazidi Voice of America journalist Dakhil Shammo briefed the White House about the dire situation. And of course, the victims on the ground in the Sinjar region, who by making their voices heard were also agents.

The most valuable and most moving parts of her account are undoubtedly her documentation of the victims’ experiences. Shand gives a harrowing account of a young man named Abbas who saw his entire village massacred and only survived by playing dead. She also vividly describes the conditions on the mountain where the besieged Yazidis began to die from severe dehydration in the boiling summer sun. ‘It was difficult to tell the living from the dead as both lay with their faces in the dirt, turned away from the brutal sun.’ As the sun beat down, ‘small patches of shade thrown by a scraggly shrub sheltered four or five children who clung to each other and moaned from thirst’.

In those dire circumstances, water was so limited that each person had to subsist on one sip per day. A woman gave birth on the mountain. ‘The pain that I remember came from my lips,’ she recalls. ‘They were so dry that with each push they would crack more. It felt like my face was being ripped open, not my womb. I remember thirst. And I remember the panting hurt my throat like the air was scraping my throat. I tried to keep my eyes closed, not to see her being born. When they were forced open from the pain, the sun hit my eyes. I thought, is this what birth is like for a wild animal? But I am not an animal. Not yet.’

ISIS were not the only perpetrators. Shand’s account of the collusion of local Arabs against the Yazidis, and the Kurds in general – which belies the idea that the mass-murder of Sinjar’s Yazidis was a simply a cross-border ISIS invasion from Syria – is truly shocking. As she points out: ‘Genocides are rarely possible without the support of local actors who collaborate with the planners, whether it be the Hutus hunting down their Tutsi neighbours in Rwanda, or the Polish and French reliably turning in their Jewish compatriots during the Holocaust. Sinjar was no different.’

She doesn’t mince words when describing how the treachery of local non-Yazidis facilitated the genocide. ‘As Islamic State fighters massacred their way north, their ranks, which had started in the hundreds before dawn, multiplied into thousands,’ she wrote. ‘Those who toiled peacefully in the farmlands for decades along with the Yazidis, Sunni Muslim Arabs, donned the black clothing of Islamic State and murdered and raped their neighbours.’ It was the case that ‘no Kurd was safe, not Shia, Christian, or Yazidi’ because ‘Islamic State had reanimated an old hatred between Kurds and Arabs and now their former neighbours were madmen, driven by ethnic revulsion and true or imaginary grudges, released among the innocent to slaughter for their pleasure’.

Shand also provides a broad historical context for how this came to be by tracing the history of Sinjar during Saddam Hussein’s rule. As part of his Arabisation programme against Kurds and other minorities, the Iraqi dictator resettled Arabs in Yazidi lands and also relocated Yazidis to urban centres away from their villages, which is how Sinjar initially became a major city for the rural Yazidis. When his regime was toppled by the 2003 US invasion of Iraq those Arabs were furious by their overnight loss of power and standing. Yazidis, on the other hand, wanted to coexist and integrate with their Arab neighbours and let bygones be bygones. They did so by giving ‘their new [Arab] neighbours the honorary title of Kreef. At the birth of every Yazidi child, a non-Yazidi became the child’s godfather or Kreef. It was an attempt to build ties of loyalty between the Yazidi and Arab Muslim communities’.

How these non-Yazidis turned on their neighbours in their time of need is one of the most disturbing parts of Shand’s book. Survivors talked about witnessing their ‘Kreefs’ openly collaborating with ISIS. ‘Following the attack, many Kreefs brought their granddaughters from Islamic State before raping them and then holding them for ransom,’ Shand wrote. In another instance, the son of a Yazidi family’s Kreef telephoned them and insisted they come to their house outside their village, assuring them they will be safe only for the terrified Yazidi to hear the man’s father in the background insisting that the ‘infidels’ be brought there. These were neighbours they had known for years and thought they could trust.

In a scene reminiscent of the barbarity of the Holocaust, Arab doctors at the hospital in the city of Sinjar ‘welcomed Islamic State and escorted them through the wards pointing out Yazidi and Christian patients. The doctors loitered in the hallway outside each ward as the jihadists executed Yazidis and Christians as they lay sick and defenceless in their beds’.

ISIS’s infamous treatment of Yazidi women, the so-called ‘sex-slaves,’ is also recounted. Shand noted that the only ‘medical attention’ ISIS gave its victims ‘came from an Arab female doctor who examined the women for intact hymens’. Unmarried female Yazidis quickly realised that ‘virginity was their greatest vulnerability’ and consequently sought ‘to pretend their siblings, nieces, and nephews were their own children. For the most part this strategy failed when members of the local Arab community, working with Islamic State, entered the holding facilities to identify the unmarried women’.

At one point Yazidis requested that the US Air Force bomb towns like Kocho, where ISIS held hostages in order ‘to kill them before they could be raped or murdered by ISIS’. This came atop other disturbing accounts of parents getting ready ‘to shoot their own children’ so they could avoid their fate in ISIS captivity.

Not all the non-Yazidi Sunnis colluded with ISIS that August. Shand describes how in a small village named Bashuk, which had less than a thousand inhabitants, the local Sunni Muslims, non-Arab Mandikans, helped save Yazidis from certain death. While most of the able-bodied Yazidis fled immediately the Mandikans hid their vulnerable, sick and elderly in their homes. When ISIS entered the city, thinking all the Yazidis were gone, they were greeted by the Mandikans who tried to assure them that everything was fine and they did not need any assistance. However, ISIS fighters remained in the town for another eight days and the Manikans risked everything to keep their Yazidi neighbours hidden. After ISIS finally left, the Manikans smuggled out the remaining Yazidis to the foothills of Mount Sinjar to take sanctuary. As a result of the bravery of those Mandikans, Shand has not found any documentation or evidence of ‘a single murder by Islamic State of a Bashuk Yazidi’.

Shand describes the disarray among the Kurdish Peshmerga who failed to protect Sinjar. ISIS even arrived at the outskirts of the capital city of Kurdistan, Erbil, a development that prompted the first US airstrikes against the group two whole months after it captured Iraq’s second city of Mosul, about 50 kilometres away, with ease. Shand does a good job describing the deliberations of the US consulate in Erbil at that time and the fears among staff that another Benghazi-type incident could have transpired. The Kurdistan Workers’ Party (PKK) group and the affiliated Syrian Kurdish People’s Protection Units (YPG) are given credit for their intervention into the Sinjar region that August and their opening of a land corridor into northeast Syria which undoubtedly saved thousands of lives and prevented that genocide from being even worse.

The book also gives a fascinating account of how diaspora Yazidis in the US contacted their relatives, through WhatsApp, and gathered real-time information on ISIS positions as well as the status of the survivors, a real ‘game changer’. President Barack Obama’s aide, Ben Rhodes, recalled that Centcom evaluated ‘all that information and it added to the picture’. While the information wasn’t necessarily the basis for individual airstrikes against ISIS, it certainly helped when the US military corroborated it with its own intelligence. Also, publicly disclosing such specific details likely prompted action to be taken more swiftly.

Shand has described in powerful detail how a crime against humanity unfolded in Sinjar in two fateful weeks of August 2014. This is an essential account of a modern genocide.