by Rob Pinfold
BACK 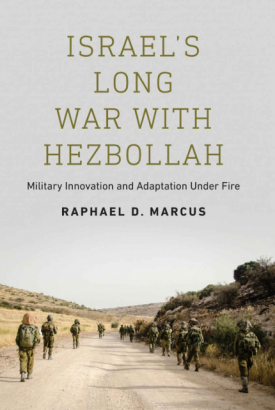 The old adage that ‘generals are always prepared to fight the last war’ encapsulates the on-going exchange of threats between Hezbollah and Israel. Both sides almost always refer back to the 34-day ‘Second Lebanon War’ in 2006, which ended with both Israel and Hezbollah claiming victory.

The war of words is underlined by a mutual agreement that the next round of violence will be comparatively more painful. Hezbollah’s Secretary General, Hassan Nasrallah, has warned that the group’s rockets will target all of Israel, rather than just the north of the country. Similarly, the Israel Defence Forces (IDF) have been unequivocal in stating that a future conflict will devastate Lebanon, with targeting parameters extending beyond Hezbollah to the Lebanese government. In short, both sides’ future tactics are a product of their perceived failures in 2006.

Throughout the prolonged struggle, both sides have tried to predict and affect the behaviour of the other; the 2006 war is just one example of the mutually-agreed rules of engagement between Israel and Hezbollah. But ‘the rules of the game’ are breaking down.

Though many commentators look back to 2006, Raphael D. Marcus’ new book charts how the ‘rules of the game’ were adhered to, changed and broken over several decades. Chronologically, the book spans from the beginning of the Israeli occupation of southern Lebanon – known as the ‘security zone’ – in 1985 and ends by examining how recent developments, such as the Syrian Civil War, have affected contemporary interactions between Israel and Hezbollah.

Ensuring easy accessibility and relevance for diverse audiences, Marcus divides his military history of the Israel-Hezbollah conflict into two parts. Part One deals with both sides’ ‘strategic adaptation’ – how each party interacted with each other and developed the ‘rules of the game’. Part Two digs deeper into ‘operational adaptation’ – the changing tactical choices of Hezbollah and the IDF.

The book began as the author’s doctoral thesis in War Studies at King’s College London, but avoids excessive diversions into theory or academic jargon. Instead, Marcus relies on an impressive range of interviews, spanning Hezbollah supporters, Israeli generals and UN officials, amongst others, alongside extensive fieldwork, in both Israel and Lebanon. Because of this diversity of source material, Marcus provides a fuller, more balanced picture than many other works on the same subject.

Indeed, too many commentaries claiming to explain the Israel-Hezbollah conflict portray an incompetent, bumbling and casualty-averse IDF losing time after time in southern Lebanon and an innovative rag-tag guerrilla group who are always one step ahead and never make mistakes.

Marcus makes great strides in dismissing this one-sided narrative. He highlights the changes, successes and failures affecting the IDF and Hezbollah in equal measure. For instance, Marcus pulls no punches in describing the comprehensive failure of the IDF to prevent the growth of Hezbollah and the Israeli employment of disproportionate and ham-fisted tactics that alienated the Shiites of southern Lebanon. Equally, Marcus does note that the IDF were often successful in thwarting Hezbollah attacks, particularly in the early 1990s. Though Marcus is harshly critical of IDF tactics, the book comprehensively unpacks the ‘organisational learning and adaptation’ practiced by Israel and Hezbollah alike. Hezbollah’s transition from what Israeli general Amiram Levin refers to in the book as a ‘terrorist organisation’ to a ‘guerrilla group’ is delineated in full. Similarly, the debate captured in Part II between IDF modernisers and traditionalists will be relevant to military historians interested in how a modern army incorporates technological advances, whilst retaining its dynamic edge.

The book is replete with quotes from IDF figures who are now household names in Israel, such as Benny Gantz, Gabi Ashkenazi, Moshe ‘Bogie’ Ya’alon and Shimon Naveh. Particularly amusing is a stand-out quote garnered from Naveh, who dismisses former IDF chief of staff and Defence Minister, Shoal Mofaz, by stating: ‘I know him. He stinks, he is an idiot but a terrifying bastard […] absolutely from the garbage.’ Equally pertinent is a quote by Benjamin Netanyahu in 1999 that ‘rocket attacks cannot be prevented by territorial occupation,’ a statement that is a far cry from the current prime minister’s attachment to territorial control.

The book will be particularly illuminating to English-speakers interested in the conflict, as Marcus reveals information that can often only be found buried deep within esoteric Hebrew-language works. For instance, page 20 describes in depth what former Likud Knesset Member and former Defence Minister, Moshe Arens, calls the ‘schizophrenia in government’ that led to the 15-year Israeli occupation of southern Lebanon. Marcus goes to great lengths to chart how the ‘security zone’ was the product of a messy compromise that very few generals or politicians really wanted.

Marcus describes the 2006 war as a ‘harbinger of future conflict’: a blueprint for the dilemmas faced by modern, high-tech armies in ‘asymmetric’ conflicts, with ramifications beyond the case study alone. Indeed, by extending its analysis beyond that 34-day war, this book is relevant for both generalist scholars of warfare and those interested in the complicated and violent history of relations between Israel and Hezbollah. The conflict between Israel and Hezbollah is far from over and this book will likely require subsequent edits to incorporate new developments. Nonetheless, it is a timely intervention that bridges the gap between English and Hebrew sources and provides an historical prism through which to comprehend the contemporary tactical and strategic preferences of both the IDF and Hezbollah alike.

Rob Geist Pinfold is a Postdoctoral Research Fellow at the Division of International Relations at the University of Haifa and a Neubauer Research Associate at the Institute for National Security Studies at Tel Aviv University.