by Robbie Sabel
BACK 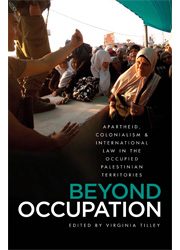 The book is a brief for the claim that Israeli practices in the territories amount to ‘a crime against humanity.’ It is at once extensively researched and unabashedly partisan – a deeply flawed mix of false analogies, partial histories and political polemic.

The book is edited by Virginia Tilley of the University of the South Pacific in Fiji. No attribution is given as to the authors of the various chapters; however, the introduction to the book remarks that the book ‘began its life’ as a report to the South African Government by Professor John Dugard, who subsequently was appointed as special rapporteur for ‘Palestine’ by the UN Human Rights Council.

The book is extensively referenced using a large number of Israeli, NGO, UN and other sources. Quotations are taken from Israeli Court decisions, making a lot of material available that would not normally be available to the non-Hebrew reading public. However, most of the quoted Israeli legislation and ordinances applicable to the territories date from a period prior to the establishment of the Palestinian Authority and have had no validity or effect for the last twenty years. Since 1993, it is the Palestinian Authority that has jurisdiction over the overwhelming majority of the Palestinians in the West Bank while Hamas has jurisdiction over the whole of the population of the Gaza Strip. These Palestinians are subject to neither the Israeli military administration nor the regular Israeli law. Their laws, courts, police, prisons, taxes etc. are Palestinian and Israel has no jurisdiction over them. The issues raised by the book are, for the most part, moot nowadays.

The book analyses Israeli rule in the territories and comes to the conclusion that it is a form of colonialism since Israel is attempting to dominate Palestinian society and suppress its right of self-determination. However, it fails to fairly present the opposite view, namely that two national groups are vying for the same tiny piece of land. The book does not inform readers that Israel accepts the right of Palestinians to self-determination and that the issue is in fact a border issue of some tens of miles, or less. This is not a colonial situation.

The authors treat the Oslo agreements as being forced by a military occupier on the subservient Palestinian population. It is legitimate for the authors to criticise the agreements but they should perhaps also have pointed out that they were signed, as witnesses, by the heads of USA, Russia, Egypt, Jordan, Norway and the EU, the drafters were subsequently awarded the Noble Prize and Mr Arafat has not yet been accused of acting on behalf of Israel.

In addition to the attempts to taint Israel by association with apartheid and colonialism, the book contains a number of strange statements and inaccuracies. The authors state that ‘Israel’s military court system also makes no presumption of innocence.’ This is patently incorrect. The US invasion of Afghanistan and Iraq is characterised as a ‘proxy invasion’ on behalf of Israel. This presumably would be news for the US administration and Congress. In referring to the 1947 Partition plan no reference is made to the fact that the Palestinians and the Arab States rejected it. The only reference to the 1948 war is that ‘Zionist forces swept across the proposed boundaries of the Jewish State.’ There is no mention of the Arab armies that invaded Palestine. The authors talk about mass imprisonment of Palestinians although the latest figure they give, which is for 2011, is 5,554 of whom 229 were in administrative detention. The authors compare restrictions on Palestinians entering Israel to the South African Pass Laws but make no mention of the fact that prior to the intifada there were practically no restrictions on movement. Another strange statement is that Israel has imposed ‘a near blanket closure’ on the Gaza Strip and therefore ‘thousands of Palestinians have been stranded in Egypt.’ Surely the readers are entitled to be informed that Israel has no control whatsoever over the Egyptian-Gaza border? The authors allege Israel’s Law of the Return is a case of racial discrimination; presumably this epithet also would apply to similar laws in Ireland, Germany and elsewhere.

The authors note that the Palestinians ‘may elect’ to reclaim the ‘right to self-determination in all of Mandate Palestine’ and ‘reject the Zionist doctrine that Mandate Palestine’s population consists of “two people in one land”.’ This does not inspire confidence in their desire for a peaceful solution, though it tells us much about the agenda of the book.