Book review | A Horse Walks Into a Bar 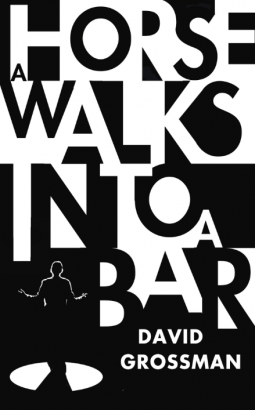 A Horse Walks Into a Bar, an opening line to many a haggard joke, is not necessarily what one would expect as the title of a new David Grossman novel. Yet here we are, at the tale’s beginning, inside a comedy club in south Netanya on Israel’s coastal plain as a ‘short, slight, bespectacled man’ is thrust onto the stage ‘from a side door as if he’d been kicked through it’:

He takes a few faltering steps, trips, brakes himself on the wooden floor with both hands, then sharply juts his rear-end straight up. Scattered laughter and applause from the audience. People are still filing in to the club, chatting loudly. ‘Ladies and Gentleman,’ announces a tight-lipped man standing at the lighting console, ‘put your hands together for Dovaleh G!’

Dovaleh G — the stage name of Dov Greenstein — is sharp and quick-witted, lively and energetic, cantankerous, acerbic, and caustic, especially in his barbed interactions with the audience. ‘You look like a pretty serious young lady, I gotta say, and you certainly have an original fashion sense,’ he says to a woman he calls Lips, ‘if I’m correctly reading the fascinating hairdo that must have been done by — let me guess: the designer who gave us the Temple Mount mosque and the nuclear reactor in Dimona?’ His tastelessness turns off his audience, but with the next joke, wins them back, manipulating them with a mix of banter, observation, and politics:

Wait, you’re from the settlements! But then who’s left to beat up the Arabs? Just kidding! You know I’m kidding, right? Go ahead and grab your compensation right now. Take twenty million dollars so you can buy beanbags and bubblegum for the cultural centre in memory of Baruch Goldstein the murd — oops, I mean the saint, may God avenge his blood. Not enough? No problem! Take another acre and another goat, take a whole herd of goats, take the whole cattle industry, take the whole country for God’s sake. Oh, that’s right, you already did!

Dovaleh seems constantly on edge and, portentously, in the audience on this night are two ghosts from Dovaleh’s past. One of them, Avishai, our narrator and thus the reader’s eyes and ears at this particular gig, Dovaleh has invited with the strange and vague request to simply watch him and tell him what he sees as he performs. Avishai was a childhood acquaintance of Dovaleh’s who went onto become a judge, until he was asked to step down from the bench. I would like to hear from ‘someone who’s spent his whole life looking at people and reading then in an instant, down to their root,’ Dovaleh tells him.

But it is a comment from the other familiar figure that acts as a trigger for Dovaleh’s onstage disintegration. ‘The show crumbles in an instant,’ Avishai observes. ‘He is agitated and unfocused. The hurricane of incitement doesn’t seem to have helped him overcome what that tiny little woman did to him. I can sense it. The crowd can sense it.’ As the set collapses, and the audience drifts away one by one, Dovaleh launches into an exploratory, revelatory monologue about a childhood trauma, which consumes much of the novel. How much of this is staged, and how much of this is a kind of genuine volcanic eruption is left for the reader to decipher.

The prose in A Horse Walks Into a Bar — a short novel by Grossman’s standards — has a certain degree of forward propulsion that hasn’t necessarily existed in his previous works. To take something like The Book of Intimate Grammar — about a Jerusalem boy who enters a state of arrested development, as Israel inches towards the Six Day War — is to experience a more lyrical, magical prose style that made extensive use of repetition, such that the feeling of reading Grossman was not dissimilar to that of rowing a boat, with the oar circling back and around, pushing against the water’s force in order to advance.

A Horse Walks Into a Bar is more confined, perhaps more than anything by the setting and timeframe of the novel, the vast majority of which occurs in one night in one room — content dictates form. Jessica Cohen, who achieved something truly remarkable in finding the right voice in English for Grossman’s Falling Out of Time — a truly beautiful yet in many ways unclassifiable piece of narrative prose that rippled and shuddered with grief — continues her fine work with this novel.

Fiction set in the world of stand-up comedy gives Grossman a new forum in which to explore old themes, namely the pain of loss, but whether A Horse Walks Into a Bar is a successful novel is an altogether different matter. Fundamentally, there is an inherent tension between the natures of novel versus stand-up comedy. The latter is of course a form of stagecraft, one that depends upon rehearsal and the constant working and re-working of material. But comedy is also inherently spontaneous and reactive, freewheeling, even slightly anarchic.

The novel is a very different beast, in that sense. It might surprise or delight on the first reading, and there are new depths of pleasure to be uncovered in subsequent encounters, but the prose itself will never change. It’s a static form. Narrative prose can never be responsive and combative, disordered or chaotic like stand-up comedy, for not only are the words set there on the page but also novels demand structure and a kind of symmetry and pace of events that doesn’t quite exist in real life.

This is all to say that, at least until the point where Dovelah’s monologue began, there was something about reading a stand-up comedy routine in A Horse Walks Into a Bar that felt a little inert and flat. Grossman is in command of his character, and his wit and understanding of human nature are not in doubt. However, the novel and stand-up comedy are simply two horses pulling in opposite directions. They felt irreconcilable, contributing to a sense that stand-up comedy was not quite the right device with which to tell the story or explore the themes that compelled Grossman to put pen to paper in the first place.

By Simon Round
Amos Oz has lived through every one of Israel’s wars and fought in two of... Read more > Winter 2016 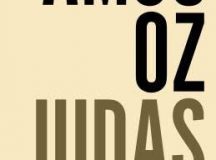 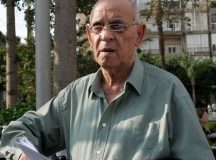 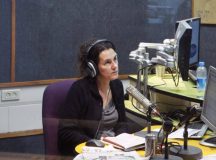 By Noga Emanuel
In 2002 the Israeli novelist Irit Linur wrote an open letter to the editor of... Read more > Winter 2016