by Emily Thornberry
BACK 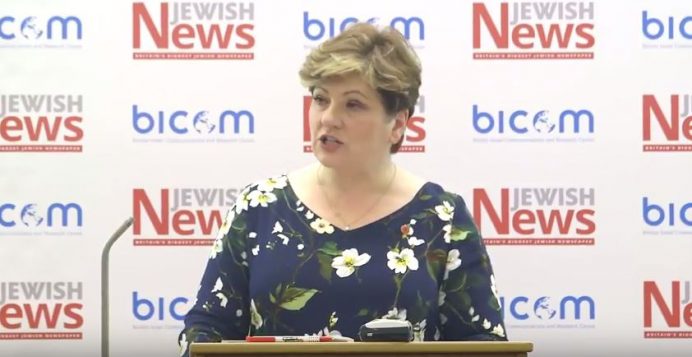 This speech was delivered by the Shadow Foreign Secretary Emily Thornberry at the BICOM-Jewish News Conference, held in London on 2 November 2017 to commemorate the centenary anniversary of the Balfour Declaration.

Let me start by thanking BICOM and the Jewish News for inviting me to today’s historic event, and once again giving me the opportunity to emphasise the Labour Party’s long-standing unstinting and unequivocal support for the State of Israel.

As I frequently remind my colleagues, Labour’s support for Zionism and the establishment of a Jewish State pre-dates even the Balfour Declaration, stating plainly that this State must be open ‘to which such of the Jewish people as desire to do so may return and work out their salvation, free from interference by those of alien race and religion’.

As Israel’s Ambassador to the UK, Mark Regev, said speaking last year: ‘In the years 1917-1945 at Labour Party conferences, support for Zionism was expressed on no fewer than 11 separate occasions. In doing so Labour proudly embraced a progressive internationalism, standing in solidarity with the Jewish people in righting a historic wrong.’

And that is why my predecessors so warmly welcomed the moment 100 years ago today, when the vision of a Jewish State became the official policy of the British government.

And as Ambassador Regev said, we did so, not just because this was the right decision morally, historically and politically as we prepared for the aftermath of war. We did so also because we in the socialist, internationalist movement felt a true brotherhood with the early pioneers of Zionism, and their egalitarian goals.

We think in particular of the Kibbutz movement, a group of people dedicated to establishing a more equal, communal society, free from the prejudice and persecution that they had experienced in their home countries.

And even today, despite the challenges that we must address in respect of relations with the Palestinian people, modern Israel still stands out as a beacon of freedom, equality and democracy, particularly in respect of women and LGBT communities, in a region where oppression, discrimination, and inequality is too often the norm.

When I met with the Mayor of Tel Aviv during the summer, I was proud to congratulate him on the success of Tel Aviv Pride, which welcomed over 200,000 people under the rainbow flag. Contrast that with recent events in Egypt, where even the waving of that flag at a pop concert was enough to prompt dozens of arrests and calls for the criminalisation of same-sex activity.

And as we look back over these past 100 years, we must also salute the resilience and strength of the Israeli State and the Israeli people against all those who have sought to harm and destroy them: a resilience that has had constantly to adapt as the threats over the years have changed from the conventional warfare of 50 years ago to the ever-shifting tactics of terrorists today.

But while the threats have changed, the underlying theme has not: it is the denial of Israel’s right to exist, and there should be no place in modern society, and – let me stress – no place in the Labour Party for anyone who holds that kind of abhorrent view.

And I will say to you today what I said to the Labour Friends of Palestine at the Brighton Conference just a few weeks ago: that anyone who believes in a two-state solution loses all right to a hearing if they simultaneously indulge those who deny one of those states its very right to exist.

And that above all is why the Balfour Declaration is so important, because it enshrines the existence of the Jewish State, and the rights of its people as a formal principle of our foreign policy, and that will never, ever change.

But in looking back at the past 100 years, we must also look forward. After all, if Lord Balfour had been told that 100 years on, his letter would be the subject of all these commemorations, debated and discussed today by news channels all over the world, he would doubtless have been amazed.

But I would like to think that, even so, he would not have changed a word of his declaration. Put simply, his words have not just stood the test of time, they have passed the judgement of history.

And there is a lesson in that for all politicians and leaders: that our actions – and even our words – today, can have implications and consequences for decades to come, and we must take them carefully and soberly with that in mind.

But let us also be honest: if Balfour was able to look now at relations between Israel and Palestine: one community facing the constant threat of terror; the other trapped in grinding, inescapable poverty, what would he think?

If Balfour was able to look across Europe today, not least here in Britain, and see anti-semitism once again on the rise, and ‘Zionist’ used as a term of abuse; if Balfour could see those things today, I don’t believe he would be celebrating. I believe he would instead invoke all of us to regard his Declaration – even after 100 years – as Unfinished Business.

Consider the line which states that the declaration should not prejudice ‘the rights and political status enjoyed by Jews in any other country,’ a line included because many feared that the existence of a Jewish state could give anti-Semites the excuse to try and push Jews out of their current homes.

That threat has not gone away. And when we see members of the Jewish community in Britain having to stand guard outside Synagogues and Schools, we know that the most basic right of our Jewish community – the right to safety and security – is still in serious jeopardy.

Consider also Balfour’s promise that ‘nothing shall be done which may prejudice the civil and religious rights of existing non-Jewish Communities in Palestine’. That too remains at best a work in progress.

So, while marking this centenary, we must also be honest and say that – until Jewish communities all over the world are free from the threat of terror, and the scourge of anti-Semitism, until the rights of the Palestinian people are secure and we have a viable, secure, internationally-recognised Palestinian State, living side-by-side, in peace and security, with the State of Israel, then the work that Balfour started cannot be considered complete.

I first visited the Middle East over 30 years ago when my father was stationed there for his work with the UN. Since then, I have returned many times – most recently for the funeral of Shimon Peres – and I will be visiting Israel and Palestine again next week.

But over the years, one thing in particular has struck me: that every time I’ve returned, the divisions between the Israeli and Palestinian communities appear more entrenched; the social interactions I used to see when I first visited seem increasingly rare; and we see actions taken on a daily basis that seem to entrench division ever deeper, to the point where the gap will be impossible to bridge.

Whether it is the despicable practice of glorifying terrorism to children, by naming schools after suicide bombers, or the way in which support for illegal settlement-building and the demolition of Palestinian homes has become almost a political purity test for some in the Knesset.

And yet, as views harden – and become more bitter – on both sides, it is not as though the wishes of a mother for her child have changed. Whether they live in West Jerusalem or in East Jerusalem, their wishes are the same as mine for my children: first and foremost, security and peace, and freedom from fear or poverty. But also the prospect of a bright future, the opportunity to have a life that is better than their parents

And yet, that hope – as things stand – looks like a pipe dream. As things stand, the young Israeli child will grow up in a world where air raids, car rammings and random stabbings remain a commonplace fact of life. And where military service will remain not just a compulsion, but a necessity, because they live in a country surrounded by hostile neighbours who deny their very right to exist.

And the young Palestinian child will grow up in a world where they are more likely than not to be unemployed, reliant on humanitarian aid, and unable to shape their own future, let alone enjoy a better life than their parents.

And my greatest fear is that, as Israelis and Palestinians become more isolated from one another, the prospect of a political solution to secure security and stability, peace and prosperity, throughout the region, and for the long-term – that prospect will start to disappear.

And what’s more, the incentives for politicians, whether in Israel or Palestine, Washington or London, to take courageous steps to try and break the deadlock or expend political capital on this issue – those incentives will disappear too.

But as I said earlier, the lesson of Balfour – the one thing we must above all remember today – is that bold steps and brave statements are not only necessary, but can resonate for generations to come, whereas the judgement of history will not be kind to politicians who simply do nothing but let a bad situation continue getting worse.

100 years on from Balfour, we are reminded that the words and actions of politicians can make a difference. So on this anniversary, I hope all politicians will take the opportunity to reflect on how they will be remembered in 100 years, and whether they will use the time they have to try and take decisive action in the Middle East, to complete Balfour’s mission, and to advance the cause of stability, security and peace.