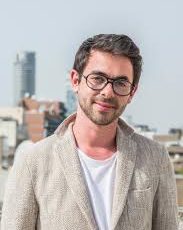 Jake Witzenfeld is a British film director and producer. Born and raised in Essex, England, Jake graduated from the University of Cambridge with a degree in Middle Eastern Studies in 2012. Shortly thereafter, he relocated to Tel Aviv where he discovered the story that became ORIENTED. Jake co-founded a creative agency and has launched an international production company with 10 projects in development, both documentary and scripted. ORIENTED is Jake’s debut film.

The Eloquence of Oriented: An interview with Jake Witzenfeld