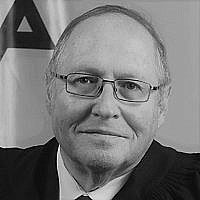 Justice Elyakim Rubinstein was appointed Justice of the Supreme Court in 2004. In 2015, he was appointed as Deputy President of the Supreme Court, a position he held until 2017. Prior to his role as a Supreme Court Justice, from 1997-2003, Justice Rubinstein served as the Attorney General of Israel where he participated in negotiations with Syria (1999-2000), in the Camp David Summit (2000), and as the head of the Israeli delegation to numerous conferences about intolerance and antisemitism (2001-2003).

‘The Jewish State is a must. Democracy is a must’ | An interview with Elyakim Rubinstein