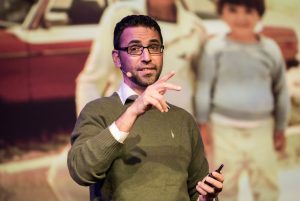 Aziz Abu Sarah is a National Geographic Explorer and Cultural Educator, as well as a TED Fellow. A Palestinian from Jerusalem, Aziz is the cofounder of MEJDI Tours, a social enterprise focused on introducing multi-narrative cultural education. In the past, Aziz also served as the Executive Director of the Center for World Religions, Diplomacy, and Conflict Resolution at George Mason University (2009-2015), and was the chairman of the joint Israeli-Palestinian organization the Bereaved Families Forum (2006 to 2010). In the field, Aziz has pioneered and managed many projects in conflict resolution and community relations.

For peace, we need vision, hope and bridge-building: an interview with Aziz Abu Sarah